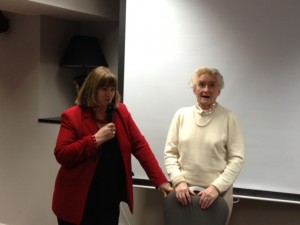 Dr. Imelda McCarthy, Fifth Province Centre, Dublin, made a presentation, on behalf of the FTAI, to Katie McGing at the recent FTAI AGM on the 1st March 2014, and spoke about Katie’s enormous contribution to Family Therapy in Ireland as follows:

It is such a delicious privilege to honour Katie McGing, one of the five founders of our Association. Next year, FTAI will be 40 years old and our honoured guest will be all of 90 years old.

In 1974, the Irish Association of Social Workers had a team of five people organise events around the Year of the Family. This team of Social Workers included, Katie McGing, Philip Kearney, Barbara Kohnstamm, Susan Lindsay and Josephine Glynn. At the end of the year, the IASW suggested that this team continue their work outside of the association and so the Family Therapy Network of Ireland, as it was known then, was born in 1975.

Since the outset, Katie was a generous, dynamic and creative force. She opened her home to meetings along with Angela Walsh and she also organised peer group sessions at her agency, St. Michael’s House where she was a senior Social Worker. Here, groups of us had opportunities to see some families using a one way screen. She also invited Virginia Satir to Ireland on a few occasions in the early days. Also, it was Katie who honoured Virginia at the First International Family Therapy Association in Dublin in 1988. Virginia had been invited but unfortunately had died of pancreatic cancer a short time before the meeting. Katie was also on the ‘core group’ of the Network for many years. This was a group of seven who met regularly plotting and planning a future that might unfold.
We dreamed of training programmes and I remember getting Feedback, our Newsletter, up and running on an old Gestetner machine in the Mater Child Guidance Clinic at the time. How far we have come, Katie, from those heady days of conversations in circles on the floor drinking wine. We can remember Margaret Mead’s words – “Never doubt that a small group of thoughtful, committed citizens can change the world; indeed, it’s the only thing that ever has.”.

Well that small group of seven in the early days made possible what we have today – a complex National Association, Master’s degree programmes in Family Therapy, major national training institutions, several PhD’s which have addressed family and systemic therapy together with internationally recognised therapists.
We have come a long way, thanks to Katie, her dreams and her team of 1974 and 1975. Katie, FTAI honours you and celebrates your wonderful 90 years.

Trainin in Supervision Programme – Clanwilliam Institute Recent publication of book by Trish Murphy “The Challenge of Retireme...
Scroll to top